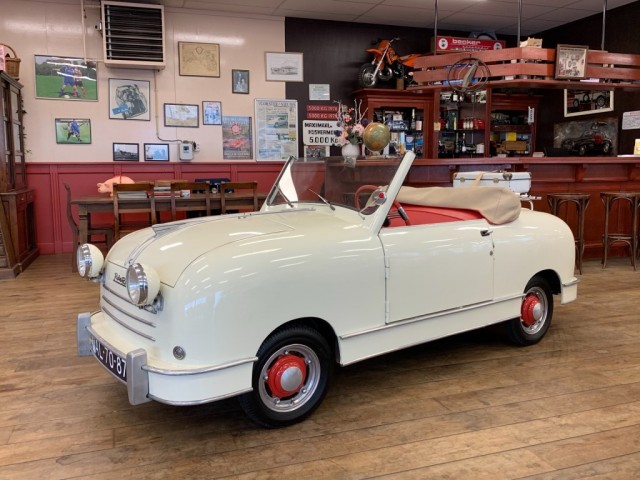 --COOL-- Super zeldzame microcar te koop ! Deze Rovin D4 komt uit 1952 en is in zeer goede staat.
Robert and Raul de Rovin began building cyclecars and motorcycles in the 1920s. After World War II ended, the French government encouraged the development of economy cars to get the nation moving again after the devastation of war. Low purchase price and cheap maintenance were essential. Rovin began production of the D2 -- a doorless body with a tiny 260cc engine; about 200 were produced from 1946-1948. The D3 was introduced in 1948 and it had a larger engine and the body now had doors, windows, and a roof. By 1950, the D4 which you see here went into production. Rovin was most successful in the early 1950s, although car production continued until 1961. By this time, the small company could no longer compete with the lower-priced, mass-produced cars of the large French manufacturers. Only 1203 build. RARE MICROCAR, musthave for the real collector.
De Croon Classics has been a family–run company since 1928, and now the third generation are working in the car and oil business. If you have any questions or would like to receive more pictures, please do not hesitate to call us at 0031-571275903. We are open to the public by appointment only. Wir sprechen Deutch / Wij spreken Nederlands / We speak English.